En réalités gives a voice to those who, in one way or another, bear the brunt of the world’s social deprivation. A masterful creation which won the first ever Prix Célest’1 in 2019.

Published in 1993, La Misère du monde is based on a field study carried out by a team of twenty-three sociologists under the direction of Pierre Bourdieu.  An investigation which focuses not only on the “deprived conditions” that come with material poverty, but also the “deprived status”, that comes with the inferior position a person can occupy in a world of privilege. It provides a vision that stretches across all areas of society. Interviews with a homeless couple, an executive secretary, an immigrant worker, two building managers, an unemployed woman, three college students, a woman in a nursing home…
These men and women all indirectly accuse one another of being the enemy – without even knowing that they are connected by shared conflicts, struggles, and dreams.  Alice Vannier notes: “Despite the book’s title, I think that this project brings a great deal of joy, hope, and even humour. Because what emerges from these accounts is above all courage – the courage to admit how hard it is to feel that you exist.” Performed by a formidable group of actors, this musical show tunes into opposing and complementary visions of reality, all the while conjuring a piece of theatre that is constantly moving and exploring, plunging us into life up to the hilt. 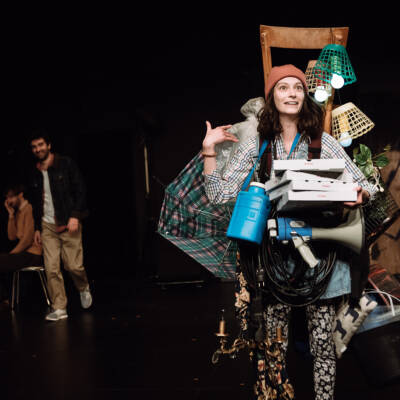