Sacha Ribeiro and Alice Vannier take to the stage together to explore the possibility of changing roles, changing places. This is their way of making the stage into a place to search for freedom and question gender stereotypes.

One night, Sacha Ribeiro and Alice Vannier both had the same dream: a play in which Alice wore an evening dress and Sacha a two-piece suit. By the time the dream performance was over, the two actors had swapped outfits. The actor was wearing the dress, the actress the jacket, shirt, and trousers…
Could this dream have something to do with suppressed yearnings? With the norms that shape masculinity and femininity in our society? These two artists wrote 5-4-3-2-1 J’existe (même si je ne sais pas comment faire) in an attempt to understand exactly who they are. For an hour, together they try to work out how to live in spite of their constraints, failures, awkwardness, and lack of understanding of themselves and of others. They are trying to redefine what it is that makes them unique. To transform their doubts into a way of reclaiming themselves – and the future. 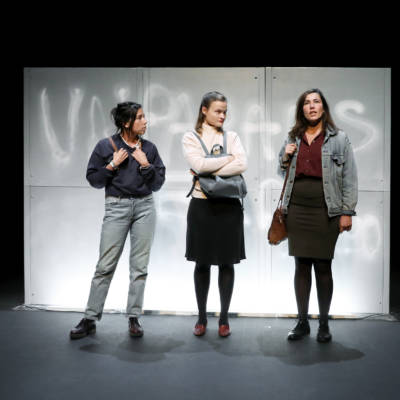